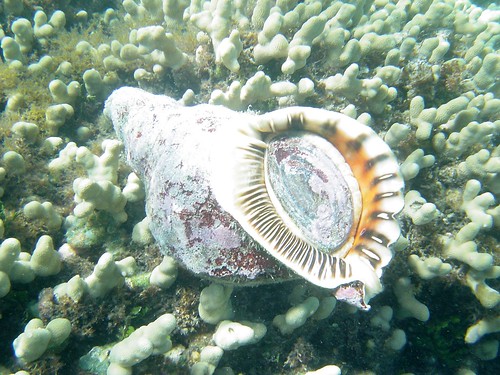 Outbreaks of crown-of-thorns starfish, Acanthaster planci, have been a major issue in coral reef conservation, as their diet consists mainly of corals, thus destroying large sections of coral reef. While there have been many theories on the causes of outbreaks of the crown-of-thorns starfish, one theory supported by scientists is the removal of its natural predators, which has allowed its populations to expand.

One such predator is Charonia tritonis, more commonly known as Triton’s Trumpet, which has evolved a tolerance to the starfish’s toxins. It is an active predator that gives chase when it detects its prey and which then grips the crown-of-thorns starfish with its muscular foot and uses its toothy radula to saw through the sea star’s armored skin. Once the snail has penetrated through the skin, paralyzing saliva subdues the sea star and the triton feeds at leisure.

Unfortunately, tritons are highly prized and heavily collected for their beautiful shells. In recent years, this has contributed to the animals’ scarcity. With too few tritons on the reef, crown-of-thorns starfish populations can explode, jeopardizing the living corals that make up reefs.

Tritons are hard to find even in El Nido. Because of this, it has become standard procedure for El Nido Resorts staff to collect crown-of-thorns starfish whenever outbreaks happen. You can also help protect our reefs by not collecting or buying triton shells.