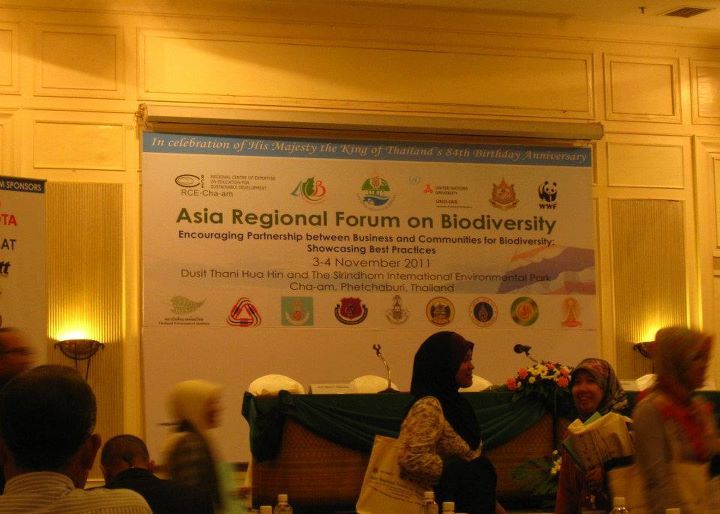 Environmental Officer Rima de Dios was El Nido Resorts’ representative to the Asia Regional Forum on Biodiversity: Encouraging Partnership between Business and Communities for Biodiversity in Cha-am, Petchaburi, Thailand last November 3-4, 2011. She gave a short presentation entitled Sustainable Tourism for Biodiversity Conservation Case Study: El Nido Resorts, Palawan, Philippines (written by Director for Environment Mariglo Laririt), where she shared ENR’s experiences as a responsible tourism operator and how ENR integrates biodiversity conservation in its daily operations. This is her story.

I arrived in Bangkok at exactly 12 midnight on Nov. 3, which meant that I had exactly 8 hours left before the forum officially started – 8 hours to get out of the airport, find my driver, travel from Bangkok to Petchaburi, check in at my hotel, organize my stuff, take a bath, and do a final run through of my presentation. Needless to say, I didn’t get much sleep that first night. In fact, I didn’t get to sleep at all.

Two hours before the forum, I was already pacing my hotel room like a caged animal. Biodiversity and business experts from all over Asia were expected to attend and I was actually going to speak in front of them in just a few hours! What questions would they ask? Will I actually know the answers? What if I bungled things up? I decided to skip breakfast. Food would do nothing to calm the butterflies fluttering madly in my stomach. Most likely it would just give them more energy to zoom wildly around. So at half past seven in the morning, after running a track through the carpet of my hotel room as I tried (but failed) to stay calm, I went out in search of the forum venue. It didn’t take long as the venue was only five floors down. I was greeted by the organizers and ushered into a huge conference room filled with hundreds of tables and chairs. Was I actually going to speak here??? Dear God, no. But as the forum formally opened and one by one the speakers took the stage, I began to feel a bit calmer. The atmosphere was very friendly and open and I realized that if I kept worrying, I’d miss out on a lot. I also found out that I’d be speaking in a much smaller room with a much smaller audience, and with that comforting thought at the back of my mind, I gave a huge sigh of relief and finally settled into my chair to listen to the other presenters.

Not a lot of people realize this, but business actually plays a large role in preserving or destroying biodiversity, and it all depends on how the business is run. I listened as various companies and organizations showcased their best environmental practices – from multinational companies such as Toyota detailing its reforestation project and biodiversity educational campaigns, to smaller organizations such as the Mrigadayavan Palace in Petchaburi with its work in preserving the native flora and fauna within its small area. As I listened to the speakers, my nervousness slowly ebbed and I felt less and less worried about what I had to say once my turn came to speak. I realized I had nothing to worry about because I had so much to share and so much to be proud of about the company I was representing. For such a small company, El Nido Resorts does quite a lot in helping conserve biodiversity. Our environmental programs are at par with the best in the world and we could actually even teach much bigger companies a thing or two about running their businesses properly so that less damage to the environment is done. When my name was called, I walked calmly to the podium, grabbed the microphone, and began to speak. Everything went smoothly, but as I reached the end of my presentation, I realized that the thing I had been dreading all night and all morning had finally come: the question and answer portion. Most of the questions I was able to answer quite easily, but one did give me a bit of a pause – how did El Nido Resorts manage to balance business development with biodiversity conservation? I had to rack my brains for an answer. How did we actually do it? Did we have a secret formula? Was there a flow chart hidden somewhere in the archives of the company that detailed a step-by-step guide on how to go about it? I was pretty sure we didn’t. I was blabbering on about something to cover up my uncertainty when the answer hit me; it was actually already floating in the question itself. There was no secret formula and there was no flow chart, because when you combine business development with biodiversity conservation, everything just becomes one big balancing act, much like crossing a high wire while holding a long pole between your hands. Every step has to be just so. Each time a decision has to be made – whether they be big ones such as deciding what materials to use to build a new resort or small ones such as deciding what fish to serve for dinner – all pros and cons must first be analyzed and scrutinized, and environmental impacts must first be weighed before a final decision is made. Things might get done a bit longer than usual and more work and more money might be needed to be invested by everyone, but we always stick to our guns. And I suppose that’s how we actually manage to succeed in our balancing act – we carefully weigh each step in our decision-making process so that our feet always manage to land on the high wire, and we never compromise our principles for easy gain. My answer didn’t come out exactly that way, I’m sad to say, but I like to think the essence was there.

When five o’clock struck and the thematic sessions came to a close, I felt a big weight lift off my chest. I had actually survived! Now all I had to do was look forward to a festive Thai dinner to be held at the Sirindhorn International Environmental Park. I headed straight to my hotel room to freshen up and take a short nap, but when I saw my bed – my huge soft inviting bed which I hadn’t even used yet – and lay my head on the pillow, I knew I would most likely not get to see nor taste that delicious Thai dinner. I threw the covers off, tucked myself in, and fell blissfully asleep after 48 hours on my feet. Some time later though, I was jarred awake up by the sound of someone knocking at my door. I looked at the clock on my bedside table and saw that it was a quarter past six. Who would be knocking at my door now? Were the organizers actually looking for me so that I can join the welcome dinner? But I thought that was optional! I had to drag myself out of bed just to look through the peephole, and what I saw almost didn’t make sense at first – it was a push cart with a huge tray on top. Then the fog swirling in my head began to lift and I groggily recalled that I had ordered food before I had gone to bed. It was room service. Breakfast was about to be served.