Confession time: last March 17 marked my first-ever Turtle Tracking Tour, taking over from former Miniloc EO Rima. I was a nervous wreck the night before. What if we don’t find any turtles? What if the guests don’t like me? Will they lynch me? On and on it went, until Kring finally told me to relax and have fun during the tour. As it turns out, I didn’t have anything to worry about . The numbers for our first Turtle Tracking Tour for 2012: eight guests, four (!!!) sea turtles, and one set of fresh turtle tracks on the beach of Dilumacad. Score! 😀

Marine Sports Guide Cris and one of the guests spotted our first turtle in Shimizu. Unfortunately, the turtle swam away before the other guests could see it. Because it didn’t have the overlapping scutes on the edge of the carapace, the guest figured that it was a green sea turtle. The second one was a hawksbill sea turtle in Twin Rocks and it was feeding. Score! Because it was feeding and we weren’t too close, it didn’t seem to mind having 10 excited people staring at it. We had lunch and rested for a bit in Dibuluan Beach Club before proceeding to Dilumacad for the turtle nests and more turtle tracking in the water.

Once we got to Dilumacad, Kuya Reden, the Dilumacad land guard, took us on a short tour of the turtle nests on the island. If the eggs were originally laid in the areas of the beach more accessible to tourists and farther away from his patrol post, he carefully dug them up and moved them to an area closer to his post so that he could protect them better. He also covered the nests with wooden cages to prevent monitor lizards from getting to them. Monitor lizards are the main predator of sea turtle eggs in El Nido.He pointed out a nest that was due to hatch that day (average incubation period for turtle eggs is 60 days) but didn’t. He promised to call me as soon as it did 😀 Aside from the turtle nests, Kuya Reden also pointed out fresh turtle tracks on the beach! He found the tracks last March 15 and quickly put a cage over the area where the tracks ended. Based on the size of the tracks, the mommy turtle was most likely a hawksbill sea turtle. He also saved some eggshells for the guests to see and touch. Sea turtle eggs are about the size of ping-pong balls and have paper-thin shells.

After the beach, it was time to head into the water to track down some more turtles. Lo and behold! Ten minutes in and Cris spots two hawksbills in a row! He was ahead with our guests who were stronger swimmers so by the time we caught up, the turtles were gone 😦 Oh well. Despite the Great Turtle Escape, we had fun snorkeling on Dilumacad’s reef. We spotted triggerfishes, butterflyfishes, angelfishes, damselfishes, and a whole lot of other fishes.

We returned to Miniloc at4pm, tired but happy from the day’s tour. Seeing sea turtles is always an amazing experience but getting to share that with other people made it even more special.

And oh, did I mention that the turtle eggs hatched just two days later? 😀 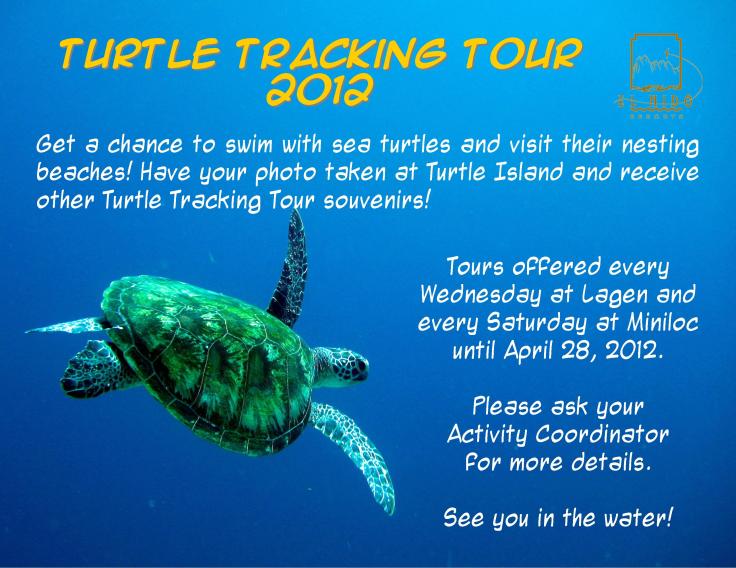 Read all articles by Macy Anonuevo.