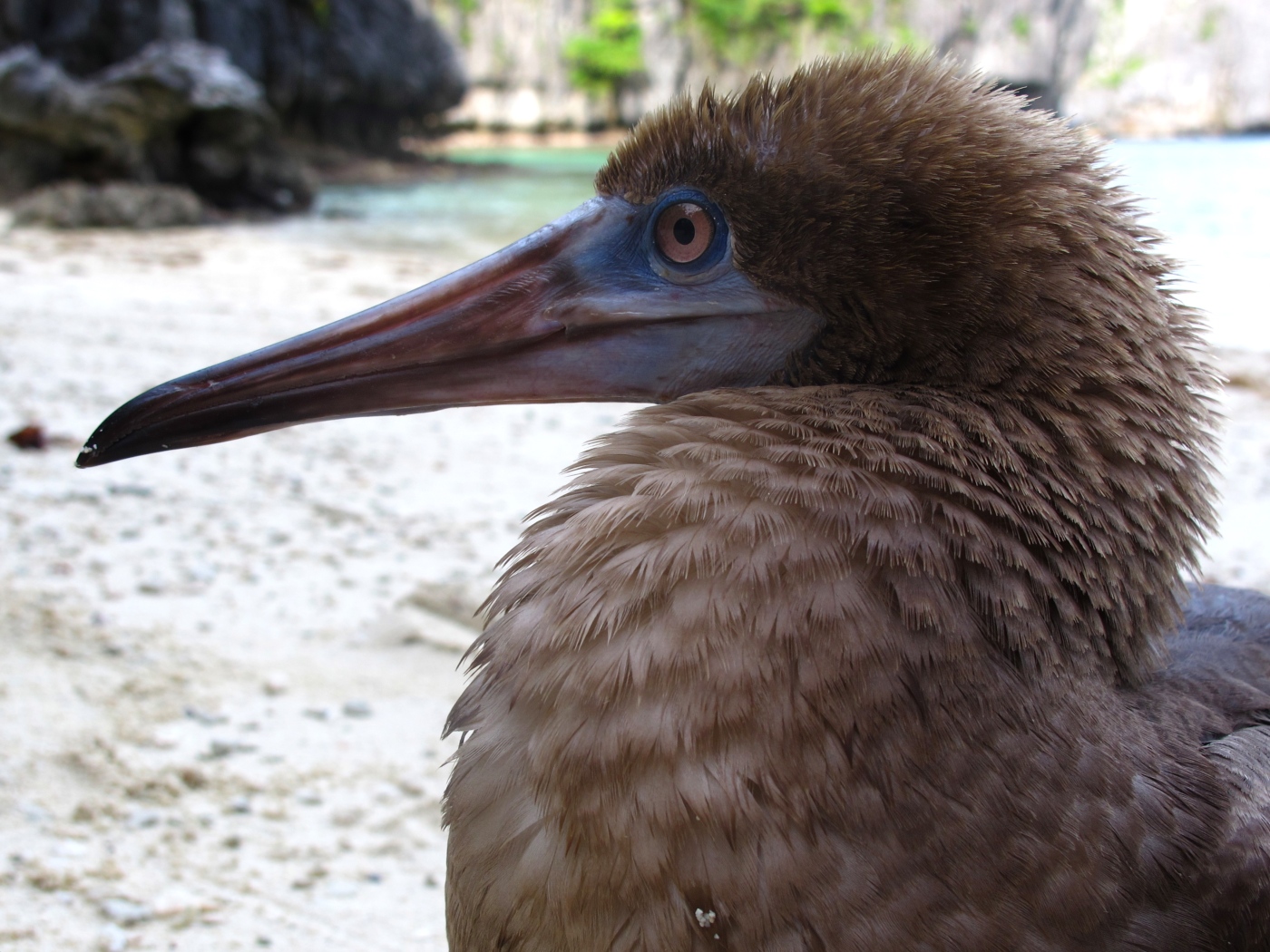 When I started working as an Environmental Officer (EO), I have had no first-hand experience in wildlife conservation. I also

did not have a formal background in Biology, so you can just imagine how excited and at the same time scared I was with the idea of taking care of a seabird. Good thing I have such committed environmental stewards, our marine sports guides, who were more than willing to share their time to assist in caring for our patient.

The Palawan Council for Sustainable Development Staff (PCSDS) and I agreed that seabirds belong to the sea, not in a rescue center. What we all wanted was to give Booby the best chance it deserved to make a full recovery, return to the wild, and thrive.

I frequently monitored its condition, especially the leg where Booby had the rope tied. There were no serious problems observed from having had an entanglement – no foot swelling, skin damage, or severe injuries such as skin and tendon lacerations. The skin looked pretty (in pink) healthy and it was not limping. Every morning, I noticed Booby becoming more alert and responsive.

Providing proper care proved to be challenging. It required careful and skilled attention, and we are grateful for the supportive response we received online from the Wild Bird Club of the Philippines (WBCP), and even veterinary rehabilitators from the International Bird Rescue (IBR). We provided the best attention to Booby’s diet and the need for it to exercise normal behavior patterns. It must learn survival skills, including how to find food and escape predators, until it was ready. As much as possible, human intervention was kept to a minimum.

Juggling my other tasks as Miniloc Island Resort’s Environmental Officer and spending hours monitoring our patient, coordinating with wild bird vets and rescuers, made the days fly by. With the environment team’s experience taking care of rescued Palawan hornbill Baylo (see story here), we knew that wildlife rehabilitation takes time. We are still no experts but what we learned is that giving the care animals need, takes a lot of resources – time, effort and patience.

Although Red-footed boobies are classified in IUCN as Least Concerned, it is critical that each and every wildlife is given every opportunity possible to be reintegrated back to their natural habitat. Some of our staff, out of sincere concern, would say that it is much safer to keep Booby here in Miniloc rather than release it, because it can get killed by predators or be caught and raised as someone’s exotic pet. I would explain the need why we should always choose for the freedom of wildlife, aside from the fact that keeping wild animals in captivity is illegal.

I was advised by IBR to release Booby at an area where there are others of its species roosting, or at least other seabirds

hanging out. After a few days, we placed Booby at the breakwater of Miniloc – attempting to release it for the second time. It stood on a rock for almost an hour without moving a single bit. Not until the arrival of Miniloc breakwater’s mainstay – the grey Pacific Reef Heron. Despite its low and less distinct profile, the Heron is not at all gregarious and is a highly territorial species. It uses alert display, forward display, attacks and fights to defend its site. Sensing its potential competitor, the fierce Heron chased off Booby to protect its feeding territory.

Booby rapidly flew and fell immediately 5-meters away from the breakwater. Not realizing the power of its webbed feet, Booby struggled to swim its way to an outrigger boat right in front of the house reef. We immediately went to pick up Booby, appearing to be under extreme stress.

After returning to its improvised nest, I was shocked to see it preen for the first time! Booby kept on shivering so I turned on the heating lamp for additional warmth. When I went near the nest, it did not display its earlier signs of familiarity with people. Instead, it even attempted to attack me with its beak. I assumed that was a good sign.

Upon reading additional information about boobies and why they are named as such, my confidence in returning it back into the wild did not wane. They may need to work on their clumsiness in landing and taking off, but they are said to be graceful and beautiful fliers. I cannot wait to see that.

The following day, we decided to place Booby again at the breakwater. It seemed comfortable walking to and from the rocky shore. Compared to its behavior the previous day, Booby seemed more confident standing on its red feet.

It was only after 20 minutes when the Heron landed in its territory near the iconic Miniloc water cottages. Probably sensing the need to evade the fierce seabird, we all saw how Booby gathered its momentum, jumped forward into the wind, and flapped its wings so gloriously that I could not help but be amazed. I had mixed emotions. Some were skeptic, expecting round 2 of Booby doing another kamikaze move. But the now assertive seabird proved them wrong. It flew so beautifully, proving that no amount of threatening from Herons would hinder it from enjoying freedom back to the wild.

Elaine is anywhere. She started her career as a Tourism Officer for the Provincial Government of Isabela where she

handled community-based tourism projects in the Coastal Isabela. In 2013, she joined Voluntary Services Overseas (VSO) and served as an Ecotourism Advisor in Samar. Her restless feet and heart took her to Africa, volunteering for an ecotourism project in the eastern highlands of Zimbabwe where she acquired a global perspective in tourism and development. Elaine has a degree in Tourism with a Graduate Diploma in Urban and Regional Planning from the University of the Philippines-Diliman. She is currently the Environmental Officer of Miniloc Island Resort advocating for sustainable tourism and dreams of a world full of responsible travelers. Indeed, Elaine is anywhere- doing what she loves and what is right.

One thought on “Red-footed Booby: The Release”