On the night of February 29, 2016, it was reported to us by one of Pangulasian Island Resort’s marine sports guides Ryan that he had spotted an injured owl. We quickly rushed, and found this little guy: a Mantanani Scops Owl (Otus mantananensis)

According to his report, the owl was engaged in a fight with another bird before falling on the beach. When it was picked up by Ryan, he saw that the owl’s right eye had been damaged in the fight. We noticed that after a while, the owl lost its energy and could not even perch properly as its talons were locked.

With the advice of a veterinarian, we put it in a crate full of dried leaves and twigs to make it feel comfortable while it rested and regained energy. We also dabbed his eye with diluted betadine, and gave him a bit of sugar water to boost him with energy. We were advised to do a soft release- that is, to leave the crate uncovered so that the owl could fly away once it felt like it could.

The morning after, upon checking on the crate, we found him perching on its side, looking revitalized. Soon after, he flew away into the forest of Pangulasian Island. 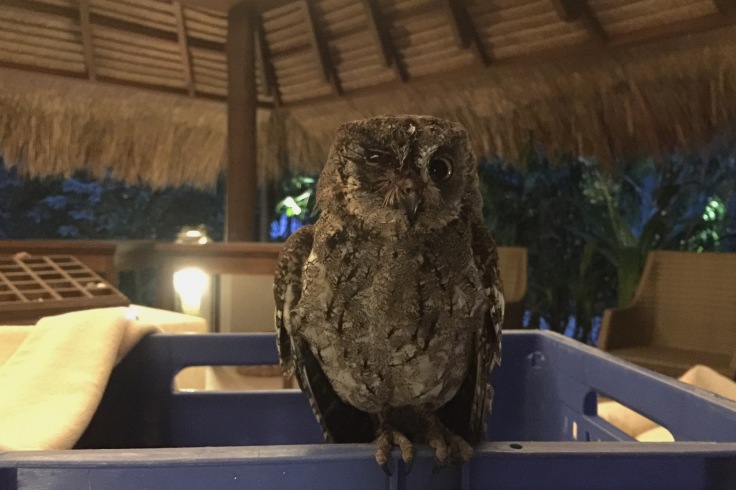 We would like to thank Dr. Luis Faller, our resort physician and Ms. Tin Mercado for helping in the care of this little owl, as well as Dr. Romulo Bernardo for all the medical advice and reassurance.