It was a hot day; I could feel the cold sweat evaporating from the pores of my skin. I was perched atop Ille Cave deep in the heart of the Dewil Valley in New Ibajay. Not more than a meter to my left was a hundred-foot drop that guarantees certain death (*gulps*). We totally did not come prepared for this hike, which was quite obvious from our outfits. We were all wearing flip flops and some of us, jeans; but the whole experience was definitely worth it! We were all busy taking pictures, trying to get the best angle, capturing the whole vista. It was the best chance to update our social media accounts as the signal was so strong at the peak—the best reception we have had since we got here in El Nido.

That brief moment on top deserved to have a few moments taken to stop. With all the superlatives in mind, I tried to relish the magnificent view of the horizon—the expanse of green fields and montane forest below us; the sea glittering under the heat of the glaring sun; the mangroves bordering the sleepy coastal village of New Ibajay; and the patches of white cloud hovering above us. There was just so much to see and discover in this wonderland that is El Nido than the sheer limestone formations and white islands dotted across its vast turquoise sea. Ille Cave for one, apparently holds a significant collection of exceptional geologic and archeologic treasures. Just before our precipitous adventure up the spire, we were standing in awe before the 250-million year old Shikamaia shells embedded in the cave’s calciferous ceiling and walls. According to Ellie, one of the archeologists working in the Palawan Island Palaeohistory Research Project, geologists actually claimed that it was the best sample of Permian fossil in the country. They have unearthed artifacts and fossilized remains under this karst tower, one of which was a set of Tiger phalanges, the only evidence of the existence of tigers in the Philippines, which were believed to have roamed the land about 14, 000 years ago. They have also discovered evidences of 9000 yr-old human cremation, making the cave the oldest cremation cemetery in South East Asia. The rest of the invaluable artifacts which include coins, shell middens, ceramic works, and bones, among others were now being showcased in a museum standing just a few steps from the cave.

Our cohort has been here in El Nido for 5 weeks now, and we have been doing a lot of inland exploring and island hopping since day one. We have witnessed how congested the town proper is due to the heavy concentration of tourism activities and massive influx of tourists as it serves as the gateway for island tours. This has put a lot of pressure on one small portion of the town, leading to a number of negative environmental and social impacts. The diversification of the tourism to new destinations like the karst features of Dewil Valley, is therefore a must to mitigate the adverse effects of tourism boom in the coastal barangays of El Nido, and diffuse tourism from the coast into the hinterland. This, in turn, necessitates a discourse on sustainable tourism development which discusses how to best manage the natural, economic and socio-cultural capital of the community, which is, in fact, one of the goals of our program.

We are currently in the planning phase of the Sustainable Tourism Summit which aims to foster a confluence of the local government and well-represented stakeholders of the tourism sector here in El Nido; and create an avenue to tackle and address the challenges of tourism in grassroots level. Ultimately, we hope to come up with a set of agreeable points of action that would serve as a guide to a sustainable development of El Nido. We seek to find a balance between promoting the economic well-being, protection of the environment and natural resources and reflection socio-cultural values of the community which would benefit both the locals and tourists in the long run. 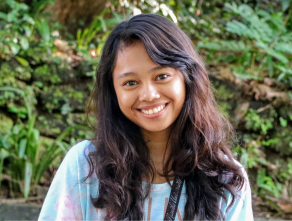 Manila University. She leads an active life on and off campus. She currently serves as the Vice President for Human Resources of the Ateneo Environmental Science Society, the Loyola School’s premiere environmental organization. She also did volunteer works with local and indigenous communities at the Tamaraw Conservation Program and Mts. Iglit-Baco National Park Protected Area Office in Mindoro, Philippines. At present, she is doing a research on coral-algal phase shift as influenced by anthropogenic eutrophication in Puerto Galera, one of the most popular tourist spots and dive sites in the Philippines. She aims to make a significant contribution in bridging the gap between the scientific and non-scientific communities through the communication of information, problems, and solutions in a language digestible to stakeholders from different backgrounds.