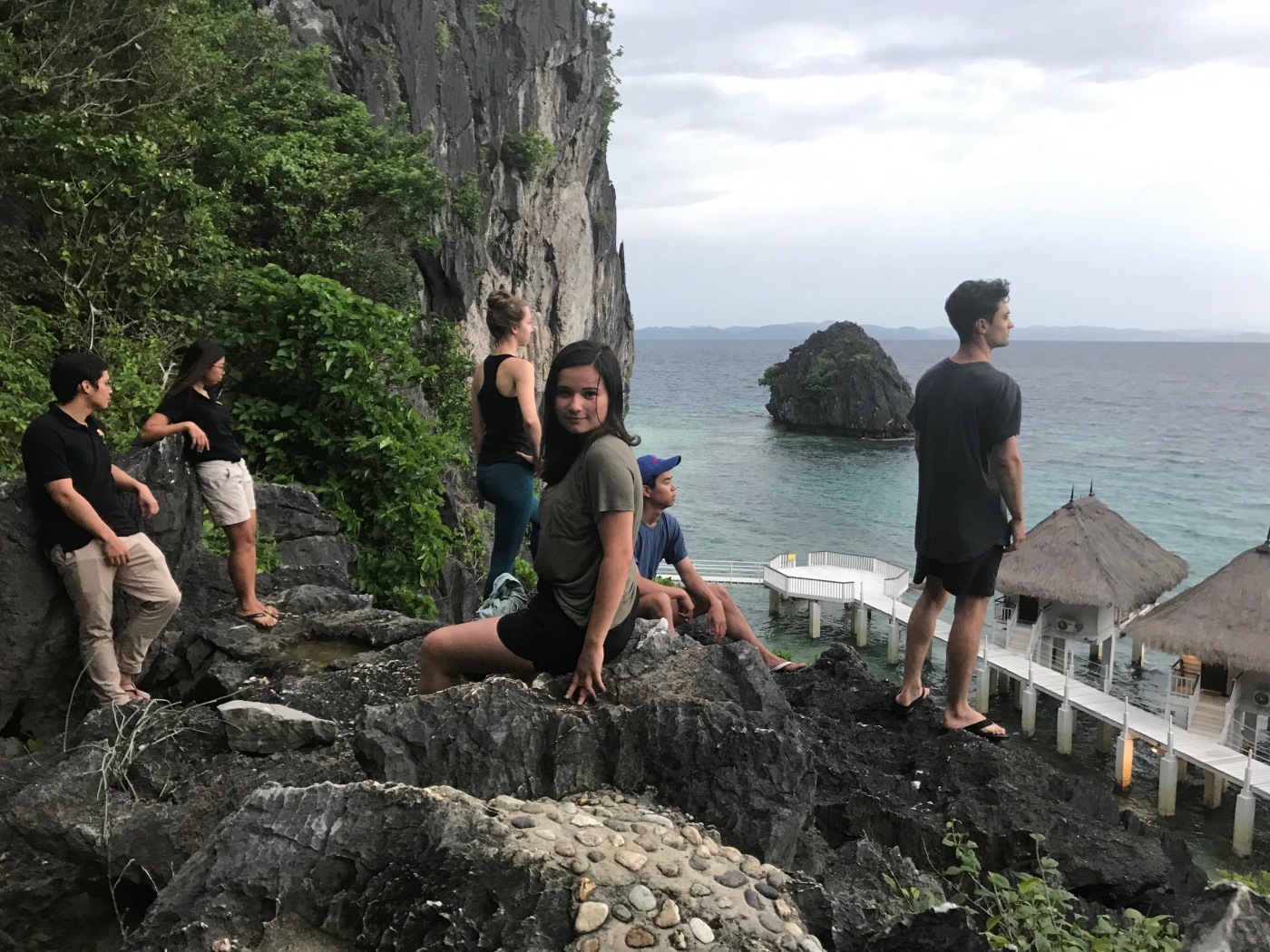 It’s me, Brian. Welcome to another episode of adventures in El Nido.

The past week was filled with travel as we completed our island rotations. I left Miniloc on the 26th of June on the 5:30 am speedboat and sat surrounded by luggage as the sun rose over the Palawan mainland. I ate breakfast at Hotel Covo before Caitlyn and I caught the 10:00 bus to Taytay. The ride across the mainland was a unique opportunity to see parts of inner Palawan: less developed and sparsely populated.

We were well-received in Apulit. The staff house had no room for us so, tragically, we were forced to stay in two-story private loft water cottages, connected by a staircase that led directly into the ocean. It would have to do. 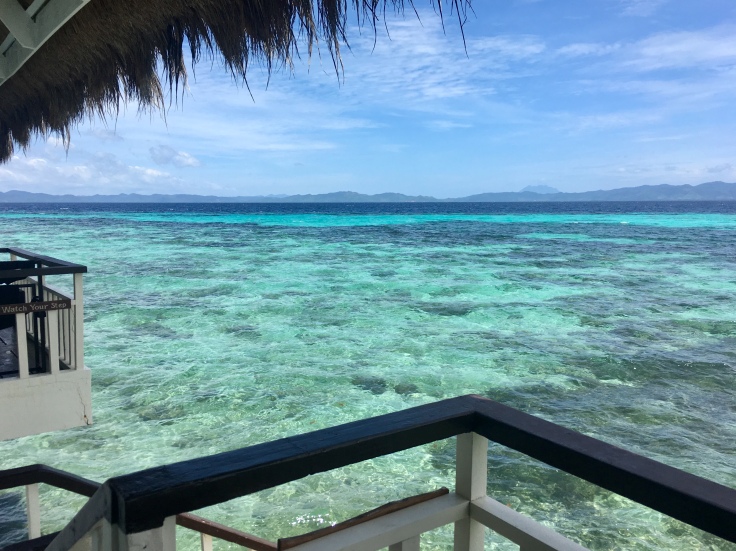 Monique, the Environmental Officer of Apulit, took us on a preliminary tour of the property, which stretches across the west face of the island. Our rooms were situated at the northern end of the developed area. The arrival area is a five-minute walk to the south from our rooms on a point of land that marks the northern corner of the main bay. The communal area, comprising of a bar, restaurant, pool, and beach, is located at the center of this bay. Farther to the south, black-tipped reef sharks weave between the stilts that hold a row of one-story water cottages above the ocean’s waves.

On our second day on the island, we accompanied Vito on a survey dive of the island’s giant clam garden. When he was finished with his notes, we floated along the reef wall until our air ran low. We spotted a turtle, a pufferfish, and other common fish species but marine wildlife was otherwise absent.

On our third day on the island, I tried to windsurf. I encountered one minor issue: there was no wind on which to surf. I retreated back to work.

Once the rest of the gang arrived, we took an outrigger to Maytegued, a community a half-hour boat ride to the north-west to tour their school. Like Kiminawit’s, it’s covered in colorful, fresh paint and organized around a basketball court. We were more than happy to meet local children of all different ages, all of whom were extremely shy and refused to talk to us despite our best efforts not to be scary. On our way out, we noticed a commotion in front of the door to the third-grade classroom. One of the boys had captured a grasshopper and was attempting to keep it as a pet. He had competition. One of his classmates, wearing a “Las Vegas Police Department” t-shirt, was in the midst of launching an extensive campaign of surprise attacks, attempting to abduct the grasshopper for his own keeping. A war of attrition ensued, ending, as all wars do, in tragedy. The grasshopper’s frail body collapsed in a particularly aggressive sneak attack, ending the war and darkening spirits of all parties involved. We said a quiet goodbye to the soul of that innocent grasshopper and were on our way.

Miles away on the beaches of Nacpan, a true tragedy was unfolding. Jamie, Ziyue, and Marga were saying goodbye to Wally the dolphin. Wally had swallowed a black plastic trash bag that had jammed itself inside of his intestinal track. Despite the heroic efforts of the green team, Wally passed away less than one day after washing up on the Palawan mainland, weak and dying. In the afterlife, Wally is becoming somewhat of a martyr for the anti-plastics movement. Wally’s tragic passing has, as of this blog, been shared by CNN, Rappler, Cosmopolitan, and other major new outlets, highlighting the havoc plastics wreck on marine life. You can read CNN’s account here: https://www.cnnphilippines.com/regional/2019/6/29/dolphin-palawan-plastic.html

June 29 was our day off. We kicked off the day with a morning swim at Isla Blanca and explored Apulit’s caves in the afternoon with Vito, who later gave us a nature tour of the island. I feel blessed to have had the opportunity to get to know Vito during my time here thus far. I’m quite impressed with his knowledge of the natural world. He’s charismatic, dedicated to his work, and will undoubtedly make an excellent Environmental Officer someday. I’m just sorry that I won’t be around to see it. 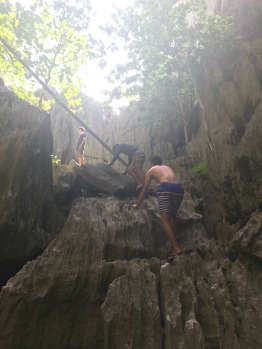 My highlight of our time in Apulit was cliff jumping. The resort had constructed a series of ladders leading to a diving-board platform 10 meters above the waves on the non-developed side of the island’s southern limestone cliffs. It looked high as we approached it from the speedboat. It felt higher from the top. I had the pleasure of being the first to ignore all of my evolutionary signals and throw myself into the water. When I appeared to have survived the initial leap, we all made a few more jumps.

Work wise, lots of progress is being made. With Caitlyn’s generous help, I managed to construct a supply chain for transporting Conservation Sew Mates material from Manila to El Nido from scratch. I learned a lot, namely that supply chains are more complicated than they appear from the outside. Now I’ll play the waiting game as data is collected from the various resorts via my guest feedback market research form. I’m looking forward to sitting down with the artists in the near future to reach a pricing agreement that makes both of us happy.

I’ll spend this week in Lio, finalizing supply chain logistics, drafting a written contract, and creating sales materials. Nate, the director of the Beeck Center, was kind enough to come visit us this week and spread around a bit of his wisdom. He was incredibly helpful to us all and we were glad to share time with him in this beautiful part of the world. The sun put on an especially-impressive show as it set on America’s birthday. Nate joined us for a stroll through town, stopping at Holy Smokes and Stix & Cones. Life is good, as it always is in Palawan. 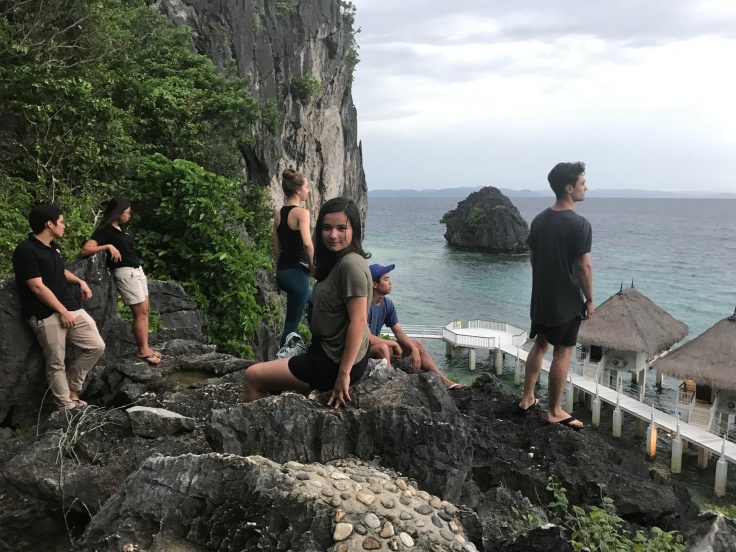