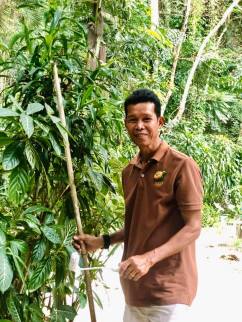 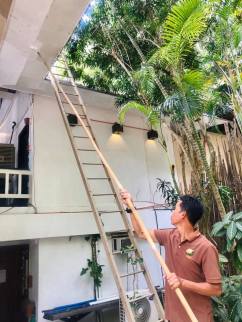 They say that a work place becomes all the more special because of the people you work with. For Jaimito “Tay Mito” Malana, Lagen Island’s painter, it is indeed special because he also works with his son Janjan, one of the island’s food attendants. Second-born of his six kids, Janjan grew up dreaming to someday work in the “resort.”

Tay Mito started as a mason in the island, before he was transferred to being a gardener and then a butcher! Janjan says his father was an “all-around” worker and he admires that. Tay Mito then started watching skilled workers do paint jobs around the island resort and learned the skill himself. Now, as resident painter, he ensures that the wall and ceiling of every structure in the resort remain neat and smoothly finished.

When asked what he wants Janjan to learn from him, “tiyaga lang sa trabaho, may biyaya rin yan,” he says. Just be persevering in your work, and you will be rewarded.