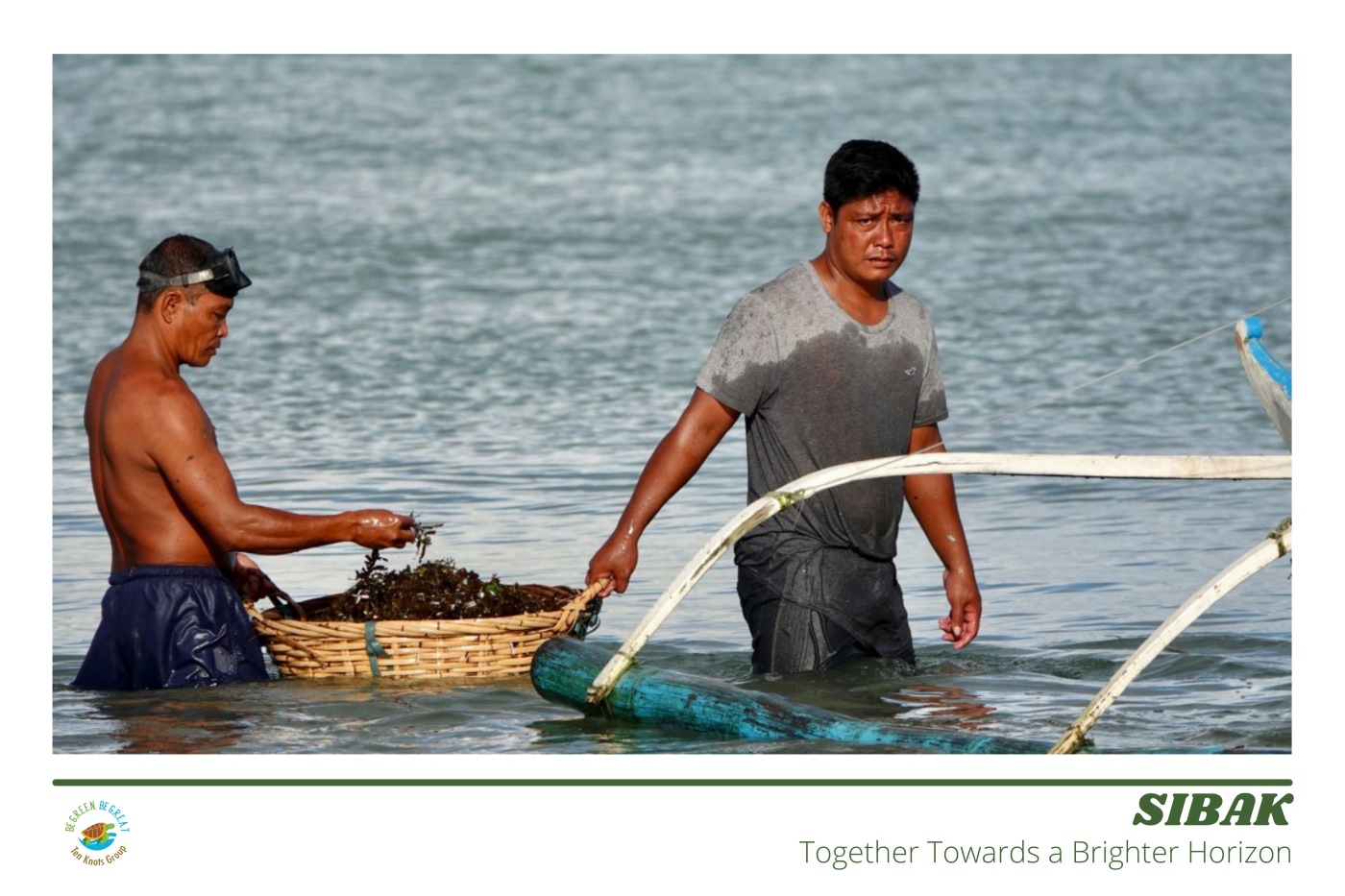 The following blog post is the fourth in a month-long series about our fishing partners in El Nido. You can read the previous blog post here.

As a result of the COVID-19 pandemic, many businesses, organizations, and communities in the Philippines have shut down, but not for Samahang Itinataguyod ang Bakawan Antas ng Kabuhayan People’s Organization (SIBAK), a fishing organization based in Barangay Villa Libertad. Instead, it did just the opposite. Formed in the 1990s as Villa Libertad Small Fishermen Cooperative but remaining relatively inactive since then, SIBAK resurfaced as a more robust organization during the pandemic to ensure the well-being of its 116 members, electing new officers and starting new projects. Throughout the pandemic, the members of SIBAK have persevered and progressed as fishers, farmers, and stewards of El Nido.

Neither of the SIBAK members’ livelihoods are immune to challenges. As fishermen, they must battle turbulent weather between the off months from October to January–in particular, the dreaded Northern winds that make even reaching the sea from the river a challenge. On the flipside, sweltering heat can impact fishing by driving cold-blooded fish deeper into the water and sapping fishermen of their energy. To beat the heat in the months of Jan to June, the fishermen will often catch squid in the cool evenings. On land, the livelihoods of farmers are extremely dependent on weather: hot weather easily kills their crops while rainy weather floods them. With COVID-19 and the subsequent restrictions on their movements, the farmers were limited in when they could visit their farms and obtain essential supplies.

By partnering with Ten Knots on several projects, SIBAK was able to address the challenges that its members face. Thanks to the development of a 1.5km access road at Sitio Landingan, it is easier for their members to reach the shore, by foot or by vehicle. New identification systems for members funded and implemented by Ten Knots have helped foster a sense of pride in being part of a legal fishing community. Ten Knots also connected three of the members to an NGO hosting upskilling sessions on the production and sale of patis (shrimp paste) and bagoong (fish sauce), providing a valuable source of alternate income. In addition, Ten Knots funded payaw-making (a fish aggregating device typically constructed out of bamboo) which can serve as shelter for stormy weather, a resting place, a protected fish nursery, and a regulated fishing place. Impressively, the designing and construction of the payaws were entirely carried out by the members in only five days.

Even though they don’t directly partner with the Ten Knots resorts, the fishermen of SIBAK still feel the effects of the pandemic on tourism. During a virtual interview, Kuya June, a SIBAK fisherman, told us about one memorable day, prior to the pandemic, when he was fishing off of Lio Beach surrounded by his children, grandchildren, and eager-eyed tourists. To Kuya June’s surprise, some foreigners approached him and started hauling the fishing net with him. Suddenly, a crowd of tourists joined the effort, making his kids and grandkids feel like stars as people surrounded them, cameras in hand. Eventually, the foreigners completely took over the nets. Kuya June thought the whole interaction was hilarious—the foreigners were fishing for them! Despite missing his daily target of 20 kilos, Kuya June explained that he valued this priceless cultural interaction with the visitors and looks forward to the day when they return.

Throughout our captivating conversation, it became clear that the members of SIBAK are more than just fishermen: they are also stewards of the environment as sustainability is at the heart of their organization. They emphasized in our virtual interview that they want to be known as the group that takes care of the mangroves surrounding their village and all that live in them as this species serves as a valuable fish nursery for the replenishment of fish and affects the quality of the oceans. In their words, as a group and fishing organization, the sea is their livelihood and life at the same time.

There is a word that I learned in Tagalog—bayanihan—which means working as a community. This simple term captures the essence of SIBAK: in a time of isolation and shutdowns, the fishermen of Villa Libertad banded together not only for their own good but the good of El Nido and towards a brighter horizon.

Izzy George is a rising junior at Georgetown University in Washington, D.C. majoring in Science, Technology, and International Affairs. Originally from North Carolina, USA, she enjoys hiking, kayaking, and backpacking in her free time. In the future, she hopes to unlock the synergies between sustainable resource management and economic development to address challenges surrounding food security, gender equity, and climate change.

Carsten Schoer is an International Business and Finance major at the McDonough School of Business at Georgetown University. On campus, he is part of Zeeba Investment Fund and the Compass Fellowship among other organizations. With a passion for social impact, DEI, corporate social responsibility, and sustainability, Carsten strives to improve any environment he finds himself in.